Here are some takeaways: 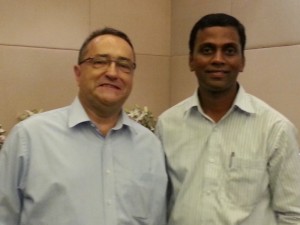 Strong correction in high yield bonds after announcement from the Fed about tapering of QE. Less correction in equities. Nothing fundamentally has changed. The sequence of Fed’s exit plan. Some investors think the QE will stop from this Sept while others think it might be December or early next year.Developed Markets are currently enjoying improving momentum. Rupee looks cheap in REER terms. REER is Real Effective Exchange Rate.

In the US, the Fed’s Balance Sheet is growing lot faster. US commerical bank lending is picking up. FOMC interest rate projection says Fed’s long term forecast is 4% by 2016. Currently it is around 1%. Tapering is not Tightening. What we saw in May and June is there’s global repositioning which led lot of fund mangers to reposition their funds. There’s been some knee jerk reaction on the recent news.

We have already had the big adjustment. In the first week of correction 28 billion US $ went out of high yield US bond funds. Nobody wants to see a repeat of 1994.

US economy: The household net worth is increasing. QE might have helped in this. Also there is a fall in the debt service ratio. Prices of housing market have gone up. It might take couple of years for the full recovery in the housing market. It will continue to outgrow for the next year or two. Positive on US economy. All developed economies have done well in the recent past like Japan, Germany and the US.

Is the party over at emerging markets ? This is an over reaction. The reaction is temporary. Emerging markets earnings have disappointed because of recession in Europe and the slowdown in china. It is cyclical.Emerging Markets share of world markets is about 11% with respect to capitalization. On a ten year basis, the emerging markets still look good.

India: Time for easing monetary policy. Recovery has been slower. Still a better relative opportunity compared to other markets. Country going through pre election period. Most foreign investors are not really worried about the outcome of the election. Either congress or bjp led alliance will be market friendly as they would like to attract capital.

Diversifying across emerging markets is better according to Geoff.